There’s a certain quality to black and white photos, that can make anybody look like film stars….

…. isn’t there. Quote of the day, I think, attributable to Hunter S. Thompson;

Life is not a journey to the grave with the intention of arriving safely in one pretty and well preserved piece, but to skid across the line broadside, thoroughly used up, worn out, shouting GERONIMO!

I’ll try to bear that in mind, over the coming few months….

Never did get to the bottom of his series, The Prisoner. Just discovered you can watch all 17 episodes online for free,via the official The Prisoner website, by the looks of it. Might have to take another look…. 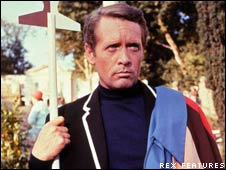 I’ve said it before, but possibly THE best bit about the Okanagan, other than the weather and certainly one of my favourite bits anyway, is the library…. And it’s just got better!

Not content to have a massive CD library section, TV shows and documentaries on DVD, they now have movies on DVD! Some oldies, some new ones, more to come as the service rolls out. Everything from the Disney films, Batman Begins, Jurassic Park, the Indiana Jones movies, Munich, The Prestige to Atonement, and more, loads! I remember speaking to the crew at the library a few months back and them saying they were worried about people like Blockbuster, but who cares if you take them out? They wouldn’t give you the same courtesy, so stuff them! I’m raving I know, but this is brilliant!….

It never amazes me, when asked what do we do without TV, that people have no idea the library offers so much, for free. In the UK you had to pay for CD’s or DVD’s and videos from the library, but here, no. You have no joining fee, no rental fees, unless you bring them back late, but the new films you get for a week, so if you bring ’em back late, well, that’s your fault.

So, get off your backsides and get yourselves off to your local library, especially if you live here in the Okanagan. You can even save yourself a few quid by cancelling the cable TV….

Mind you, if you encounter the guy with the beard and dangerous ties, steer clear. Not only does he keep turning the checkout machine off, while you’re checking your things out, but he’s right rude! And whatever you do, don’t get on the wrong side of Sophie….

You know when time is passing when your son takes you to the ice hockey. I had to pay for it mind you, and drive us there, but he said he’d saved up some money to handle the food and drink for us for the night, which made it special. So, just before game time, he treated me to a coke and pepperoni pizza.

Good game though, our own town team, the Westside Warriors took on the visiting Sweden U17’s. Considering they were they playing the a national side, they did bloody well, best I’ve seen them play and won the match 5-3. It was fast, it was rough, it was great. It made Sam’s night when it was announced that both teams would be in the foyer signing autographs. So, we finally left at around 10pm, yeah, on a school night, having queued up and worked his way down the line getting all of them!

Plans for the “big day”, none as such. I think I am going to head off the butcher’s in a bit to grab some tornado steaks, which are tasty little blighters and I think the missus is doing some pasta thing which we like. I can’t justify the price of eating out anymore, not when you can cook stuff a lot nicer at home, better quality too. I think I blogged about this at some point, either that or I’ve got it ready to unleash on the readers in the future…. Probably grab a bottle of the organic Chilean Red which is a fav in our house and then play a round of Cluedo.

Twenty years from now you will be more disappointed by the things that you didn’t do than by the ones you did do. So throw off the bowlines. Sail away from the safe harbor. Catch the trade winds in your sails. Explore. Dream. Discover. — Mark Twain

OK then, done a bit of digging, found these….

I already knew some of this stuff, maybe you didn’t….

I’ve avoided MSG for a long time now. How? I read the label, if it’s in there, I don’t buy it. You might want to start thinking about it too. Get yourself educated. Don’t take my word for it, don’t take anyone’s word for it. Go find out. Switch your brain on, especially if you have kids…. like the trailer says, the manufacturers are hoping that you are “too busy, or too lazy, or too stupid.” Which one are you?

You need to look out for your kids mate, no one else is going to. As the sun went down, the next snow storm came in to take it’s place…. So, we’re near the end of November….

News from this end, Sam needs braces, $6600 worth, over 3 years, has started his Kelowna United training, who want $1000 for the season and currently has tonsilitis.

The missus has had to re-interview for her job at the bank, as the woman she was covering for has decided not to return. We’ll know more hopefully on Monday. If she doesn’t get it, having had to do a lot more work for no more money, well, the feeling is, she’s had enough….

I’ve been turned down for 3 more jobs this week, which puts our position of buying a house at the bottom of the pile, if not the dump. I am in talks with a couple of people to develop and build a couple of websites as well as waiting to hear about some articles I have written for a couple of magazines out here.

And Holly is rehearsing for her upcoming performance, of “The Wizard of Oz” at the Kelowna Actor’s Studio and coming along with her swimming lessons.

So, not all good news here at the moment, there are people out there with more pressing problems, in the current climate, but nothing I can do about that.

On a more positive note, we got our monthly meat pack from Vale Farms (www.valefarms.com), the organic meat supplier at the Farmers Market this week. I was expecting a larger hit than usual, being that it is organic and “everything organic is more expensive“, right, so I am constantly being told. We’d budgeted and worked out what we usually get and went for an equivalent order. Imagine our surprise, when we were presented with a bill $40 less than we spend at the regular butcher. So, we splashed out and bought a leg of lamb, something we haven’t eaten, since coming to Canada. Too expensive. And still paid less than we paid at the regular butcher. We’ll be re-ordering next month from these guys, needless to say, everyone else can go to Wal Mart if they wan’t, I’m staying put with the organics thanks.

We had to buy a new coffee machine yesterday, having burnt the other one out. It’s got a timer program fuction on it, which I set half an hour ago and I’ve just heard start bubbling away. So, that’s that for now, I’m off to pour the first one of the Sunday morning and read some of the Vancouver paper.

Twits….
Lord Boom says @jesusboom RT @2ndNewMoon: Did the 🇬🇧 police ever catch the solitary hiker they were chasing with drones in the Peak District? @ClarkeMicah https://t.…

h J R
Lord Boom says @jesusboom RT @DickDelingpole: Look, this is okay. As long as they’re not having sex in someone else’s house, having more than 6 to a barbecue or shar…