Sorry for the lack of posts everyone, I’ve been busy working, preparing the Living in Canada podcast/radio and dealing with the snow! (Pics are coming on here later!) 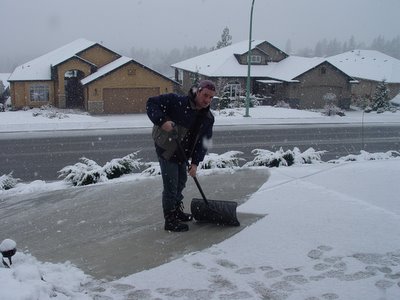 Our gear is still waiting clearance in Vancouver, the temperature is drpping to -9C, my parents are here, if I haven’t said before, and as of last week, so is the mother in law.

Christmas is approaching, the lights are going up on the houses all over the place, as well as along the streets in Kelowna. We’re all hoping the snow stays, it is coming down gently, but I have a feeling it may disappear before the festivities begin. We’ll see.

So until I get the posting going later, here’s a poem I just read in an email from my boss;

An old Cherokee is telling his grandson about a fight that is going on inside him.

He said it is between two wolves: One is evil, and full of anger, envy, sorrow, regret, greed, arrogance, self-pity, guilt, resentment, inferiority, lies, false pride, superiority and ego.

The grandson thought about it for a minute and then asked his grandfather, “Which wolf wins?”

The old Cherokee simply replied, “The one I feed.”